The Caminito Del Rey has recently been reformed. It is also known as El Camino del Rey, and it’s reopening has been among the most anticipated events of the year.

The new pathway has been talked about across the world and is known as one of the most popular activities.

There is no shortage of impressive hotels in Malaga that provide tourists a comfortable and memorable experience when visiting this magical location.

But once you book your stay and get your itinerary filled with adventures, why should you pick to explore the exhilarating path of el Caminito del Rey? 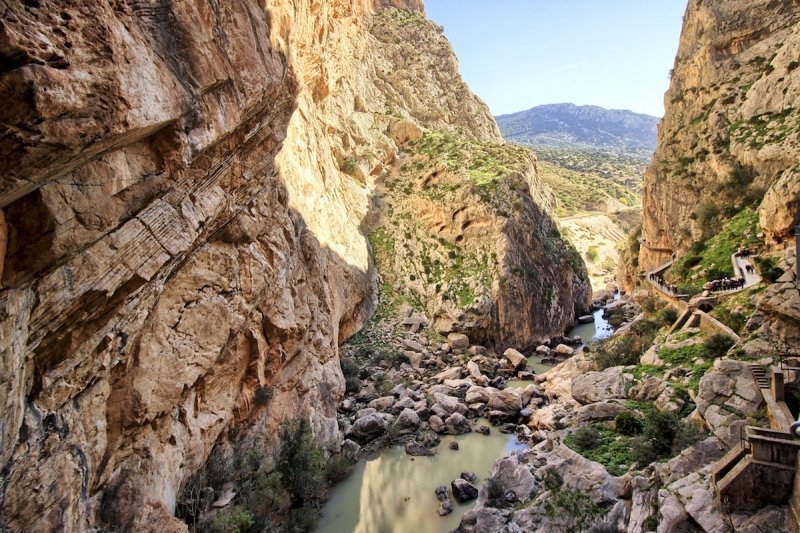 There are several facts that you should know about it before hiking el Caminito del Rey, for both your own curiosity, knowledge and to ensure safety as well. The Caminito del Rey officially opened on March 28th, 2015. It was built originally between the years of 1901 and 1905, for the purpose of transporting both materials and people between two separate power stations, which were built on both sides of the EI Chorro gorge.

Only in the early 1920’s was it given the name King Alfonso when it officially opened. The name was given because this King walked its entire length. Since then, the Camino has become one of the many wonders of Spain.

The El Chorro Gorge is an incredible place, with huge walls made from rock that are as high as 400m. The actual length of it is 3km. The term El Chorro can be translated to spurt, which is just what the water did when it traveled through the narrow ravine of the gorge.  The height difference between the two reservoirs at both ends provide a special chance to create hydroelectric energy, which was at the time could be understood as a revolutionary concept.

Other than the electrical creation, the concrete catwalk always makes for an impressive attraction and goes along the gorge. The structure was originally built by sailors who used to climb ropes and work while being suspended above a void. Some reports, although the unconfirmed claim that prisoners were summoned to carry out some of the most dangerous tasks here.

The path was built from cement and sand but has been held together by the help of metal brackets. An iron railing was also set up this simple path. In 2000, the Caminito fell into disrepair and closed after several people died due to its unsafe setup.

This danger began to create legends and attracted those looking for some serious adventure to come from across the world, with many believing it to be the world’s most dangerous pathway. But this was before the reforms of 2013 began. 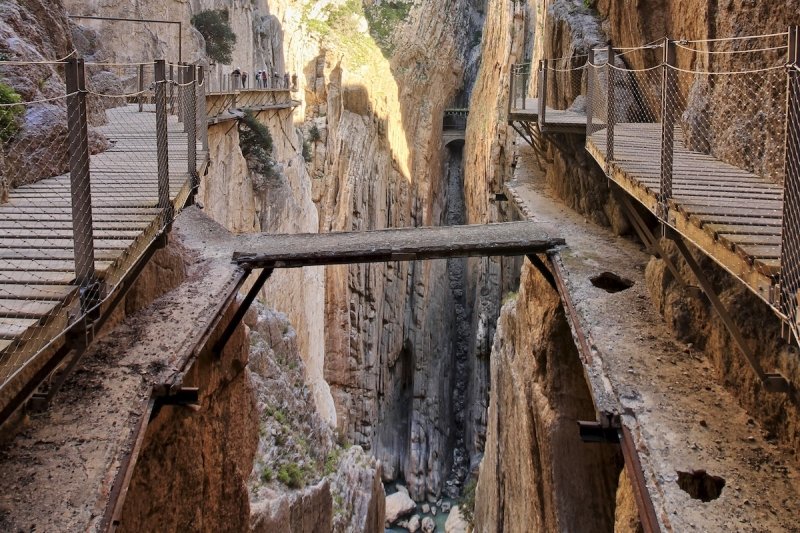 Talks of reforming Camino went on for years, but finally, in 2013 these plans came into action with a combined investment from both the city of Malaga and the local authorities, who shared the €5.5m that it cost to renovate. €2.2m has been used for the construction of the actual site, while the rest has been used for other services on the grounds.

The site has made it their goal to be one of the largest and most promising attractions in Spain.

Related reads: Explore our Budget Escapades in Lively Alicante Spain, a Travel Blogger’s Guide to Barcelona, or the Top 3 Festivals in Spain You Just Can’t Miss.

In order to obtain el Caminito del Rey tickets, they must be ordered online on the official website. The entrance was free for the first six months after opening, however, once that period ended the entrance fee is €10 per visitor, a pretty minimal cost for such an experience in my humble opinion. Guided tours are also available upon request.

Only up to four hundred people are allowed into the Caminito at one time, and a maximum of 1,100 people daily are permitted to walk through.

The total distance to walk or hike through the new Caminito del Rey site is 7.7km, with a breathtaking trail from Ardales located in the north all the way to southern Alora.

The route follows the river stream and takes approximately 4 hours, depending on your speed and how many breaks you teak. The route begins right off of the MA-444 access road, located right next to the Ardales lakes. There are various ways to reach the start at the Caminito from there.

If you are thinking of doing this hike, there are certain things that you need to keep in mind. If you suffer from vertigo or are a highly anxious person, the trail probably should not be attempted.

Upon entry, you will be given a helmet and it must be worn at all times. Throughout the entire route, there are no restrooms so you will have to come prepared. It is important to also bring food and water with you.  Children must be over the age of 8 years old and need to accompanied by an adult.

When the winds are over 35km/h, the sites close down for your safety. The walk in is linear and goes from north to south. There is a bus service that connects the two sides and leaves every half hour. As much as the path might sound intimidating, it is seriously a once in a lifetime experience and one that you will not want miss.

What do you think of the el Camino del Rey path? Would you attempt hiking el Caminito del Rey?